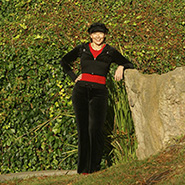 I've been involved with art, medicine, psychology, and the paranormal for decades. This page lists my main publications, training, experience, as well as listing my interviews (with audio links in some cases) and appearances. For ease of navigation, you can use the links in the list below. In general it's organized from the most recent to the oldest. Where possible, you'll also find links to some of the original articles or other material.

Other Training
Work Experience
Anesthesiologist from 1983 until retirement in 2008 including:
Professional Affiliations
Television Experience
Radio and Podcast Experience